On Wednesday, May 8, 2013, the weather was beautiful. Variable winds, no surf, perfect for fishing, especially on the North Shore.
My brother Joey helped me launch my boat 6:00 a.m. I fished alone since my crew had to work.
My plan was to head up to HO buoy to try and hook some ahi and aku. As I was trolling, 3 boats were on the inside of me heading to the buoy. I then decided the buoy might have too many boats on it and the fish would go deep. I didnât feel like jigging, so I stayed on the inside. As I got closer to Bird Island, by Keanae, on the 54 fathom, I got a double strike ono. I brought both in. Set the lures back out, and headed toward Nahiku. I was on the 50 fathom when I hooked 1 more ono. 20 minutes later I got a triple strike ono. I brought all 3 in. I headed down hill and set my lures back out. I started cleaning the deck and getting the onos on ice in the brine bag, I felt I needed to take a break. Just then 4 poles went off. I landed all 4 ono. I continued to troll and hooked up to 2 onos that came off. I headed up hill again, getting close to Bird Island, I got a screamer. This was a big ono and I brought it in. It weighed in at 51 pounds. I even got cramps in my arms reeling in that ono. As I was reeling in that monster, the corner pole went off. I thought, you got to be kidding. I even at one point was gasping for air. But I found the strength to reel in that next one. My brine bag was so full with fish and ice, that I could barely zip it closed. I decided to head home. So I cleaned the deck and looked through my chewed up lures. I was able to find a few that had a couple legs on them. I put those lures out for the troll home. Right before Puka Maui, I got a triple strike. I got all 3 in. With 1 big bag of ice left, I brought up my lures and headed home. That was a good day of fishing. Wish my crew could have been there. I ended up with, 15 ono, 3 of the biggest weighed 130 pounds all together. Biggest weighed 51 pounds. When I got to the wash rack, some of my fishing friends came by to get some info about the fish. I told them to get out there because the ono is in. Four of my friends went out the next day and got some ono and mahi.
I couldnât stay away. I went back out, alone again, on Friday. I trolled the same areas. I ended up with 12 ono and 1 mahi. Biggest ono was 43 pounds and the mahi weighed 20 pounds. Good Fishing and get your Ono lures out. Good Luck and Keep a Tight Line!
Rainbow Runner 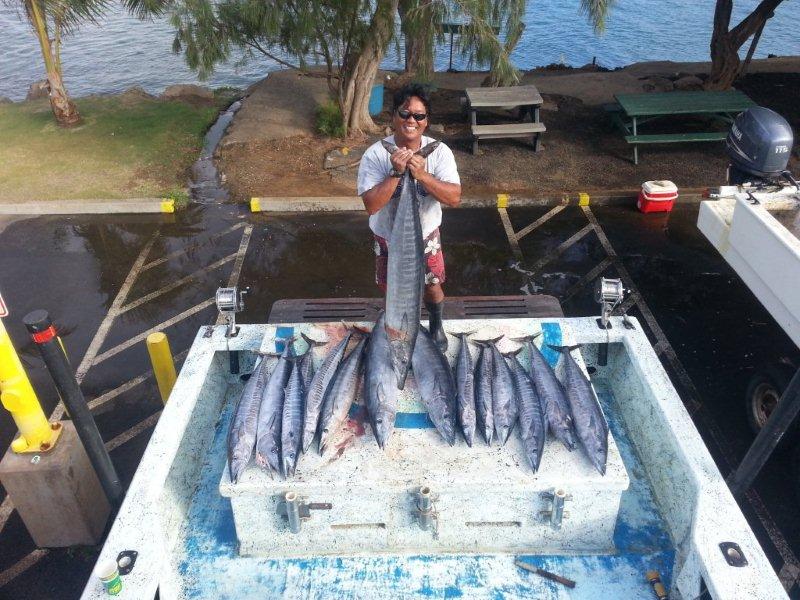 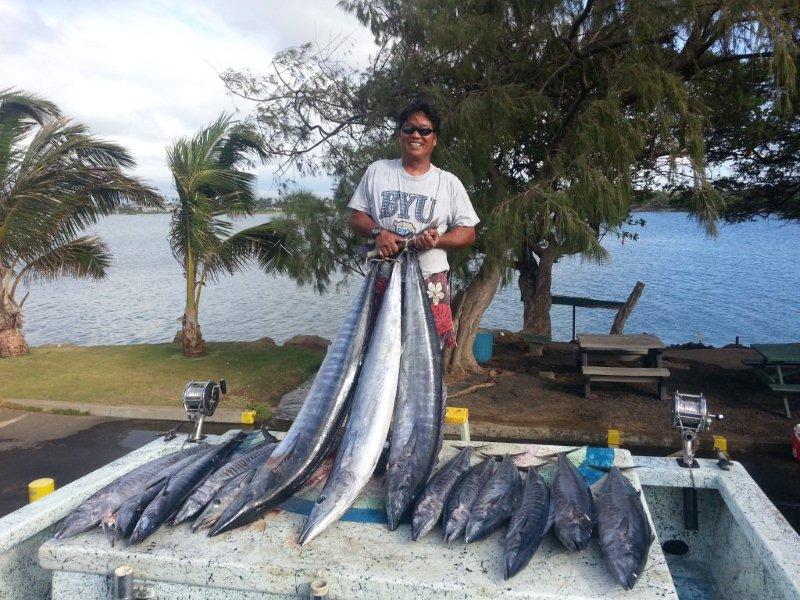