We went on a fishing trip Sunday with Ben Wong from âLetâs Go Fishing.â We shot segments on deep sea jigging, surface jigging, and running the green stick. Not only did Ben bring his camera for filming, but he also brought a lot of luck and good company. The rough and windy weather was perfect for fishing, but made it challenging for Ben to film. However, he is a pro and did an awesome job! He got some good video of the catches. On the way back, we ended the day with a 44 pound Ono.
*We will be posting the date and time that weâll be featured on âLetâs Go Fishing.â Thanks Ben!
Rainbow Runner

Remember to go over your emergency procedures....

HERE IS THE MARINE DISTRESS PROCEDURE~
*Always remember to speak slowly, clearly, and calmly!
1. Check that your radio is On.
2. Go to VHF Channel 16.
3. Press Talk button and say:
âMAYDAY- MAYDAY- MAYDAY.â
(Or âPAN â PAN â PAN,â or âSECURITE â SECURITE â SECURITE.â)
4. Say:
âTHIS IS [your vesselâs name].â Repeat this three times.
5. Say:
âMAYDAYâ (or âPANâ or âSECURITEâ)
[Your vesselâs name].
6. Say where you are:
(Use landmarks or navigational aids).
7. State the nature of you distress call.
8. State the kind of assistance you need.
9. Give the number of people on board and the conditions of any injuries.
10. Estimate present seaworthiness of your vessel.
11. Briefly describe your vessel (length, type, color, hull, etc).
12. Say:
âI WILL BE LISTENING ON CHANNEL 16.â
13. End message by saying:
âTHIS IS [your vessel name] OVER.â
14. Release talk button and listen. Someone should answer. If not, repeat the call, beginning at number 3 above.

December 30, 2011 was the last fishing trip of the year for the Rainbow Runner. Bj & I hoped to get our sashimi for the New Year. We were waiting for this beautiful water and weather for about three weeks now. We launched at 4:30 am and headed to the KC2 buoy. On the way to the buoy we spotted a few scattered birds, which gave us some hope that there may be some fish in that area. From the fly bridge, we saw an Ahi jump out of the water and a few other splashes. We guessed that the Ahi we saw was about 50-60 pounds, so we headed in that direction! Within a few minutes we had a double strike on the wire reels. As we were clearing the lines, one fish came off, so BJ fought the remaining fish. We had a feeling it was an Ahi and we didnât want it to get tangled in the propeller, so we moved the reel from the back of the boat to the front pole holder. It took about 10 minutes to get it to the leader and BJ called, âI can see color!â I got so excited that I got my gaff and I was trying to gaff the fish. But it wouldnât penetrate the Ahi, so I put it in his gills and landed it. Then I realized I had the safety on the tip of the gaff.
*TIP- When you put a rubber safety on the point of your gaff, make sure itâs not clear!
We bled the Ahi and it ended up weighing in at 97 pounds. We did our high fives and we continued to the KC2 buoy, which had about six boats. We picked up six Aku for our family and friends. Then on the way back we picked up one Ono, five Mahimahi, and a nice big Otaru. This made our day; we knew we had out sashimi for the New Year. The day turned out to be another fishing trip weâll always remember!
Happy New Year and good fishing. Just remember safety first.
Rainbow Runner 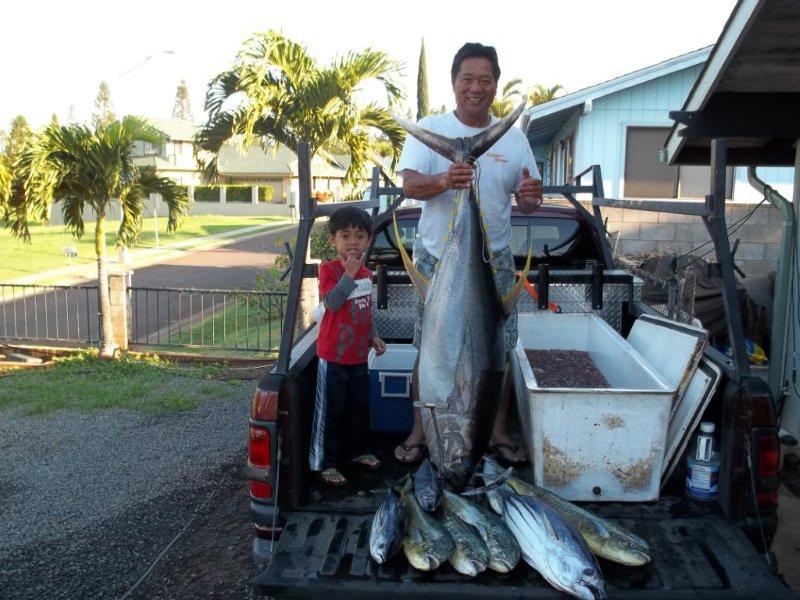